Diet & exercise are key to a longer, healthier life 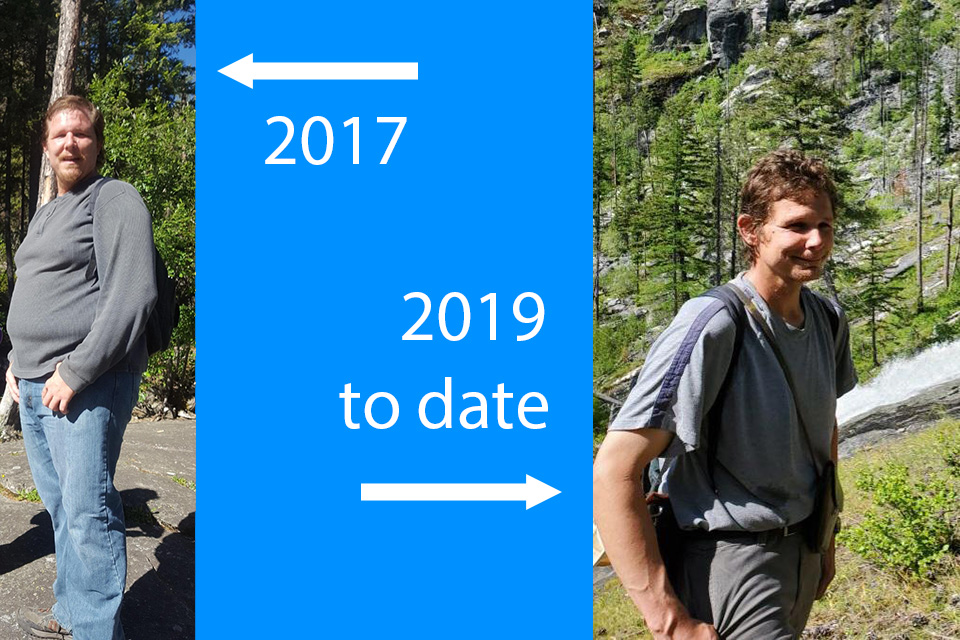 To attain a healthy weight and achieve weight loss, many people try going on a diet. While a diet with an end goal in mind can produce a temporary positive outcome, the excess weight often returns because the person curtails the healthy practices they observed during the diet.

Because maintaining a healthy weight is key to improving one’s overall health and longevity, I’ve decided to share my personal story regarding my own struggles with weight and the steps I took to overcome them.

Around the age of 13, I began putting on a significant amount of weight.  By the time I graduated high school, the scale informed me my body weight had reached 330 pounds.  At  6’2” tall, my BMI registered as a 42.4, a BMI well into the ‘Morbidly Obese’ classification.

Many of my family members carried a significant amount of extra weight with them through adolescence and into adulthood, and because of this, my assumption was that my own weight gain was largely due to genetics, so I did nothing to curtail my unhealthy eating habits or increase activity.

Upon graduating high school, I worked in various positions requiring an excessive amount of manual labor. This produced two outcomes. First, it caused me to lose a significant amount of excess weight.

By the time I reached 22, my waistline had reduced from 46” to 34,” and the scale now read 198 pounds. Because I burned so many calories by completing my daily activities, my consumption of food had increased proportionately.

This showed me that regardless of genetics, my ability to attain and maintain a healthy weight was a possibility.

However, as the years went on, and I took subsequent positions and roles within organizations which required far less physical activity of me, I did not reduce my caloric intake in proportion.

By the time I reached 28, I was back to my high school graduation weight.

I noticed a significant difference in carrying 330 pounds on my frame at 28 years of age versus my experience at 18. To put it frankly, I felt horrible.

I lived this way for nearly a decade, while making errant attempts to adhere to diets which yielded few results.

In hindsight, it is clear that a major contributor to my failed attempts to attain and maintain a healthy weight was my overall lack of willpower.

Some people are "sweets" people, some people are "salty" people — I was both.  If it was food, I wanted it, and regardless of how bad I constantly felt, the worse feeling to me was the feeling of hunger.

Continuing to top out the scale at more than 330 pounds at 38, I decided to make some changes.

It finally registered to me that 1) I had lost the weight before, and could do it again, and 2) if I did not get my weight under control, I was likely going to end up in the hospital or potentially somewhere worse.

A renewed attempt with a renewed vision

The difference between this attempt at getting healthy and all of the failed attempts over the past decade was my vision of what I was seeking.

While I had been focused on a number on the scale, I realized that the number was inconsequential and unattainable if I didn’t change my means to reach it.

Rather than viewing an attempt to get healthy as a "diet," which may at some point have an end date where I could return to my reckless eating habits, I viewed this attempt at getting healthy as a lifestyle change; a rethinking and reinvention of my attitude towards food and hunger.

Where I had been living to eat, I decided I would instead only eat to live. This change in mindset was a difficult one to actualize, but through constant repetition of practices and the support of those around me, my new vision became a reality.  I immediately reduced my overconsumption of food by:

The last bullet was important to me. Knowing that so many diets I failed to complete previously were prematurely ended because I wanted to add such foods back into my diet, my strategy was to keep them incorporated to affect a lifestyle-change which was sustainable indefinitely.

I viewed this attempt at getting healthy as a lifestyle change.

Over the course of the first year, the results of this new approach to getting healthy were astounding.

I’d lost roughly 80 pounds, and the feelings of illness I had been experiencing over the previous decade had subsided. Rather than taking my increased mobility and virility as a sign that the "diet" had worked and returning to my previous eating habits, I carried on as if nothing had changed.

By the end of the second year into my lifestyle change, I had reached the number on the scale I was passively seeking to obtain.

Having lost a total of 130+ pounds, I felt great.  I was able to do everything from my daily routine, and even completed 20-mile day hikes without getting winded.

The success of my change in lifestyle was very apparent, and by this point, the mindset I struggled to implement at the outset of my journey was deeply engrained in me.

There was no desire to return to my previous eating habits, and instead my mind turned to other activities I’d always wanted to undertake but had always been too big or unhealthy to complete.

No longer afraid of what the doctor might say to me, I made my first appointment for a checkup since I was a teenager.

The doctor noticed the extra skin hanging from my midsection, and I told them my story over the past 20 years, just as I’ve conveyed it to you.

The doctor was astonished, and stated that by making the choices I had when I did, I had likely increased my lifespan by several decades. The outcome of the checkup was the doctor stating that that I was the picture of health.

It has been 3 years since that doctor’s visit, and very little has changed about my approach to food.

I still use the same methods of portion control when eating but have no limits on the types of food I eat.

These days, I almost have to remind myself to eat, which is a large departure from the years I spent dwelling on when it was time to eat or what I was going to eat.

I share this story not to tout my own journey or success, but to state these few simple points:

Above all else, it may be difficult, but you can do it.

For all of the advancements in medical science that Science Care donors help to bring about, the key to a longer, healthier life starts with you! Learn more: