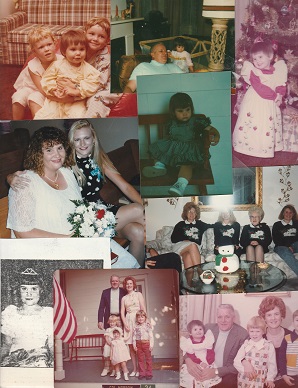 BeLUVed Daughter, Sister, Mother, Wife, Friend, Pet Groomer, Chef extraordinaire (who shoulda had her own cooking show), Luver/rider of horses, Photographer, Li'l Miss Las Pasenas winner(beaUtiful inside AND out), Child of GOD, ANGEL in physical life/now to those of us left behind... It's really impossible to summarize Allison's Life & ALL she was to so many while here, but what was Definite was her EXCEPTiONal Generosity (case in point, always bein' adamant about having her Body donated to Science in hopes it could help others). As in Death, there were times in life she hardly had anything left to her name & yet she wouldn't think twice to share/give what she had freely. She luved nothing more than playing hostess, spending Quality times with the four ANGELic children she brought into he world & feeding others sometimes with very little to work with, but always resulted in Amazing exquisite creations which was her favorite way to show/express her care for others with sustenance that required her Time with the main ingredient ALLways = Luv. I know I'm not alone in feelin that she was also the greatest dining companion/conversationalist. Used to luv seein people happily leavin with their beluved fur babies feelin all beautified, knowing that Allison was the reason with her signature puss n' boot's or lion manes with bulbous tails. Still makes me smile how Multi~talented she was tho she didn't ever think/say so. She also had quite the incredible sense of humor & really enjoyed makin others laugh, smile, feel good even if she wasn't... in the fashion that GiVERs do. The pain goes as Deep as the Luv, which is indicative how Very Much she was Adored, even though especially in recent yrs seemed having trouble accepting or feeling worthy of whenever such was the case. Lost in a world that sometimes cripples, some just don't ever seem to find their footing(not always due to lack of trying) but sometimes can't get out of their own way, nor feel deserving of any Luv, Help, or Compassion, no matter what some are willing to do. So I guess we've switched roles & you're lookin after/over us now. As someone eloquently put it: She found her place with God before she found her place here. Hope you're now flying high in Paradise in Greatest company of our Creator, free of EARTH~ly burdens, in the KNOW~ledge/finally FEELing how Truly & Abundantly LUVed & Magnificent U ALL~ways were!!!!(that some including yourSELF failed to see). Musta BEen an incredibly Large reception of known & previously unknown waiting 2 receive You. Certain you know now that everything about you is MiSSed beyond measure & our lives were far Richer 4 having YOU in it, while we had U ALLiSON.... Luving you 4EVERmore...