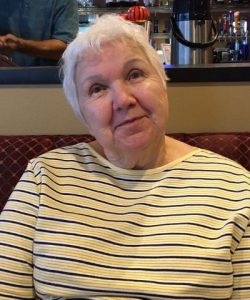 Anita Masterson Rich was born in Indianapolis, IN on August 31, 1942. She passed away in Sun City West AZ on August 24, 2019. She and her family moved several times as she grew up on the East Coast. She graduated from Staples High School, Westport, CT in 1960 and Boston University in 1965.After marrying Robin Clouser in 1965, she moved to Lawrence, Kansas. She taught elementary school for several years. She divorced Robin and moved to Vallejo, CA to teach at an elementary school.In Vallejo, she met and married Jim Rich in 1975. Jim’s career in the U.S. Navy led them to live in many places. Anita worked at Mystic Seaport, in Mystic, CT as a woodcarver. She earned her master’s degree in early childhood education at Sonoma State University. While living in Virginia, Anita was the director at a daycare center. When Jim was stationed in Copenhagen, Denmark, they were able to travel in Europe, Africa, and Asia. Jim’s last assignment was in Washington D.C. from which they retired to the Bellingham, WA area in 1988.Anita’s love of animals, grew from her summers spent on the dairy farms of her numerous aunts, uncles, and cousins in Illinois and Wisconsin. It meant from place to place where she lived, she had dogs, cats, sheep, goats, rabbits and in one place a deer farm with llamas. She also developed skills as a spinner and weaver using her animals’ fibers.Jim and Anita lived in several places in Washington. Her last job was in Welches, OR, teaching and helping students with learning disabilities transition from school to the working world.Before moving to Sun City West, AZ, Anita, and Jim lived on Whidbey Island, WA facing the Pacific Ocean with a view of snow-covered peaks in the Olympic National Park.Anita’s interest in theater was life long. She worked with Jim in some of those endeavors. She acted, directed and did costumes. She directed her last play in Sun City West. She participated in many other activities there, including swimming and sewing.She is survived by her husband, James Rich of Sun City West and her sister, Lynn Millar, of Salem, OR. Her parents, Earl and Millie Masterson, preceded her in death.Both Anita and Jim decided to give the lasting donation of their remains to Science Care. More information on donations is available here.