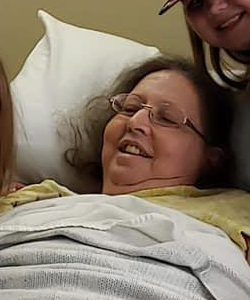 Annette or as she preferred to be called, Anndy was born and raised in Redondo Beach, CA. She grew up in Redondo Beach California. Much of her childhood days were spent on the stage and providing her vocals to various projects. She would meet her future husband, Carl, while working in the theatre, he worked on the technical aspect of the stage productions. In the mid-seventies, she would recommit her life to the Lord and would seek out ministry wherever she could. She and her husband would move out to Hemet in the '80s to be closer to her parents. There she would sing on the stage at the local park as part of her ministry. She and Carl became a fundamental part of the worship team and she became Sunday School Superintendent and would write all of the lesson plans. She was great with young children and had a phenomenal voice, Anndy would take a step back to focus on her family after her husbands passing in 2000. In 2016 she would be moved to a long-term care facility where she headed bible studies and ministered to her roommates. She was reunited with her husband on March 22nd, 2022 after battling sepsis. Her wish had been to have her organs donated so she could help someone else live. Her cause of death would not allow for this wish to be carried out. Since Anndy had made no other desires known concerning her body, the family felt it fitting to donate her as it was the only way to carry out her wish.