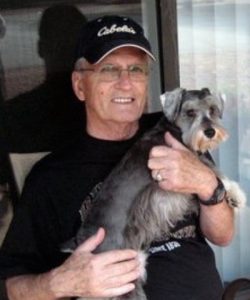 Bill was born in Indiana in 1936, the third child of Ernest and Dorothy Rueth. During his childhood he served as an altar boy, and while a teenager helped in his father’s commercial construction company. After high school he worked for a friend in the vending machine business. He enjoyed music and played drums, eventually forming his own band of musicians known as The Bill Rueth Trio, playing gigs at small clubs on weekends. He also served in the Indiana National Guard as a Specialist 1st Class in Communications. Bill worked as a television salesman and joined three fellow musicians in an Indiana-based supper club quartet called the Skyliners. He found great enjoyment playing his drums and singing in the band on weekends and special occasions. It was through this love of music that he met the love of his life. Bill and his wife were married 56 years and together they shared a passion for singing and music. Bill moved to Arizona with his wife in 1963 to start a family and had two daughters and one son. He spent countless hours of hard work at his own business to support his family, which led him to a career of over 30 years in the swimming pool supply industry. Bill and his family raised double registered Pinto/Paint horses and competed in horse performance shows. He and his wife eventually retired to Sun Lakes, Arizona, where they started a karaoke business in their spare time. Bill’s experience and success with hosting karaoke gigs allowed him to continue sharing his musical gifts as he became the music director for the all-faiths worship services at Juniper Ridge RV Resort near Show Low, Arizona. Bill’s love of singing and music brought joy to the hearts of many. After moving to Sun City, Bill and his loving wife continued to pursue their musical interests by singing performances in variety shows, where Bill also volunteered as a sound technician. He enjoyed playing his electric keyboard for both business and pleasure. Bill was not only a hard worker but also a devoted father and faithful husband. He could always be counted on to playfully tease or make a funny comment. He was an excellent handyman and was always busy with various hands-on household projects. He loved animals and was affectionately dutiful in caring for his companion dogs. These were the things that made up the life that Bill loved. He will be sorely missed and remembered by many. Five years ago Bill was diagnosed with Parkinson’s Disease. As a final gift to humanity, he willed his body to Science Care in hopes of helping medical research of his disease or any type of research that could be applied to assist others. His family is extremely proud of his legacy to medical advancements.