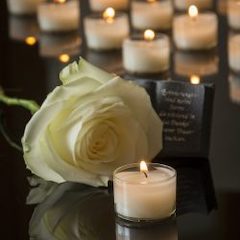 Bobbie died of lung cancer just 3 short days after receiving her diagnosis. She was very brave about it and was prepared in be with our sister who had just passed 6 months before from the same thing. I brought her home home on Friday and she died in her sleep Monday night without ever taking anything for pain. We were blessed in that way. She wanted to give back to the world so she donated her body to science in the hopes that maybe something could be learned about cancer and would help someone else.