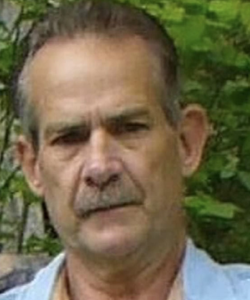 Brad was a handsome young man of 18 when we met in Tucson Az. around 1974. He worked for my cousin after school at the Tupperware warehouse. We married on December 3rd, 1976 right before he turned 19 on December 19th. 4 months before we married, Brad had unknowingly hurt his knee and it swelled up so they treated it like an athletic injury but it didn’t improve so he had surgery. His doctor said it was so badly infected that they thought it was cancer but pathology showed it wasn’t. 5 surgeries later with same symptoms and pathology results, we decided to go to a learning hospital, University Hospital. They found that he had a rare form of cancer, about 54 cases since 1934, at that time. They gave radiation treatments and took out his knee which left him with a fused leg for a year and a half. His leg started swelling in the area of where his knee had been and gradually everything below the knee swelled cutting off circulation so his leg had to be amputated. Basically he lost his leg from the treatment of the cancer due to scarring from the surgeries and radiation. He was only 24. He went through several two more amputations to get above the radiation line which had killed the bone and caused painful bone spurs. Over his life he endured around 30 surgeries, 3 on his good knee, two on his spine, a shoulder repair, a shoulder replacement and at the time of his death, he needed another shoulder repair, possible hip replacement, knee replacement and another spine surgery. He had degenerative disc disease, uncontrolled terminal high blood pressure average, 200/134 and up which he had for years, dilated aorta, suffered from a brain bleed and unbearable pain. The doctors told him they didn’t know why he was still alive. We knew...but for the grace of God! He beat everyone’s expectations and passed at age 64. This man always had a smile, realized there was always someone else worse off than him, was grateful to have a healthy family, loved people, loved country, loved his family and loved the Lord. He was health challenged in many ways since he was 19 but I can count on one hand the times he got cranky because he didn’t feel good and took it out on me. 45 years of marriage wasn’t long enough. Brad was the sweetest, strongest kindest most stubborn man there was and he was an inspiration to our Pastor, his doctors and everyone who got to know him. He liked to give people a hard time and loved joking around with them. Me, his sons Kevin and Matthew, Kevins wife Kasandra and their sons Aidan and Cody were so proud of him and blessed that he was ours. You are free now Brad, go with our love and Rest In Peace.