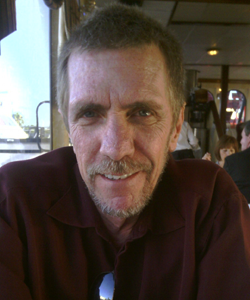 What can I say, Brian was one of a kind. He was born in Chicago, raised in Australia and then came back to the United States when he was 17. He married his high school sweetheart and had two beautiful girls. They were married for 25 years. His hobbies were: rock climbing, fencing, fishing, and a passion for film and movies. He was in a movie called “ Rockabilly Zombie Weekend “ as an extra. We met 12 years ago and have been inseparable since. We enjoyed seeing friends, going out for a beer and wings, fishing, we would enjoy just sitting next to one another and watching movies, I miss our talks. He loved and enjoyed all of his grandchildren (6 in all). He was like a father to my daughter. Brian was a giver. He would lend a hand, a dollar, food, clothing, whatever you needed, he’d be there. So, donating his body was a choice HE made and that is proof enough of his character. The world lost a kind gentle soul. He will be missed by all. I love you, my love ❤️