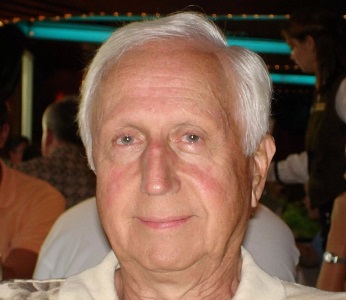 Carl was born in Chicago to Karl and Elsie in 1929 and had an older sister Helen. Carl attended Austin HS, Wright Jr. College, and U of I Champaign. At U of I Carl was a member of Delta Phi fraternity. He graduated in 1952 with a degree in Mechanical Engineering. After graduating he took a job at Teletype and joined the Navy as an officer. Carl was active duty with the Navy from 1952-1956. He was stationed on the USS McNair (DD-679) and the USS Stoddard (DD-566). Carl retired from the Navy reserves as a Lieutenant Commander after 26 years of service. Carl enjoyed his career working for Teleype/AT&T for 38 years. In 1955, Carl married the love of his life, Carol. They celebrated 67 years together and had 3 children (Carl Jr., Holly, and Craig). He had 3 grandchildren (Matthew, Corinne, and Lauren) and 3 great-grandchildren (Tanner, Cambree, and Ryder). Carl loved to travel with family and friends. Travels included cruises to Alaska, South America, Hawaii, the Rhine River, Mexico, China, the Danube River, and Puerto Rico. Carl and Carol escaped the Chicago winters by spending time in South Padre Island as “Winter Texans”. He enjoyed his time with a great group of “Winter Texan” friends. Carl’s hobbies were golf, bridge, bowling, fishing, and gardening. Carl LOVED flowers and had a habit of picking them when he would go for a walk. Carl was always willing to help anyone. For 30 years he volunteered one day a week for Avenues to Independence. Carl had an easy-going personality with an entertaining dry sense of humor. Unfortunately, in his last few years he developed Vascular Dementia. This affected him both physically and mentally. Carl was well cared for by his daughter Holly and granddaughter Corinne. Carl lived a long productive life and will be missed.