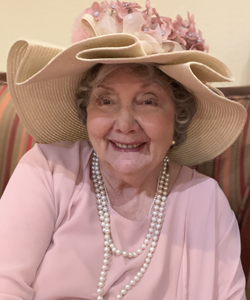 “Two roads diverged in a wood, and I— I took the one less traveled by, And that has made all the difference.” - Robert FrostOur hearts are saddened by the loss of Catherine Jean Fishberg. Catherine’s kindness, inquisitive mind, and wicked sense of humor live on in the family, friends, and community members whose lives she touched.In her giving spirit, Catherine was adamant that her body be donated to science when she passed so that she might continue her contributions to intellectual pursuit and the social good.Catherine grew up in Bloomington, Illinois, where she was raised by three powerhouse women: her mother LaVerne Stahl, her aunt Rosalyn Koos, and her great aunt Catherine, whom she lovingly referred to as “Aunt Catherine, My Great.” Catherine graduated from Bloomington High School in 1949.When she was 18 years old Catherine moved to Sacramento. She then relocated to southern California, where she resided for more than 50 years. In 2017 she moved to an independent living community in San Jose with her loving husband Sidney (Sid) Fishberg.Catherine raised three daughters, Desta, Sandra, and Staja, with her first husband John Sampieri. In her later years she served a caregiver to her mother and her aunt Rosalyn, who under her care lived to 100. After more than a decade of dating, in 1991 Catherine married the love of her life, Sid. Catherine and Sid enjoyed nearly 30 years of marriage before his passing from pancreatic cancer in 2019.Catherine had a true lust for life. She was passionate about writing, theater, art, and music. As a young woman Catherine starred in a number of theatrical productions in southern California, worked as a fashion model, and appeared every year in the world famous Laguna Beach Pageant of the Masters. An excellent swimmer, Catherine worked as a lifeguard and performed in aquatic shows. She also studied Ikebana, the Japanese art of flower arrangement.Catherine was a member of numerous professional and artistic organizations, including the Red Cross, Business and Professional Women’s Club, Women’s Architectural League, Lioness Club, Art Association of San Luis Obispo, and Cal Poly’s Beta Sigma Chi, where she served as president and received an exemplar degree. She earned her associate degree from Saddleback College.Catherine was an avid reader and writer and her quest to learn new skills extended well into the later years of her life. As a senior citizen she worked as a museum docent and completed numerous community college courses in such fields as creative writing, singing, piano, sculpture, and millinery (hat-making). She was an excellent writer and orator who won several speech contests with Toastmasters International. In her 80s Catherine made her choral debut at her Methodist church in Laguna Niguel.Catherine loved meeting new people and was always keen to share a conversation with a stranger. She would return from every flight, grocery store run, or coffee shop afternoon excited to share an anecdote from her newest friend. Catherine and her husband Sid were beloved by their local baristas, restaurant staff, and, in their later years, their incredible caregivers. As Catherine would say, she “put a shine on the day” of every person she encountered.Friends & family list (if you would like us to list names of friends & family alongside your tribute story):, Catherine is survived by her daughters Desta Krong (husband Steve), Sandra Brislin, and Staja Moschetta (husband Bob) and grandchildren Brianna Krong, Bryant Brislin, Marissa Moschetta, and Joel Moschetta. She was preceded in death by her husband Sid Fishberg, mother LaVerne Stahl, brothers John and Ted Anderson, and sister Gladys Briggs.