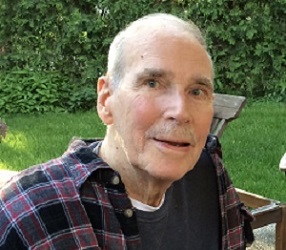 Cornelius Sippel III “Corny”. Corny passed away quietly late December 2021 at Glenview Terrace Care Center following a series of illnesses and setbacks. His accolades included a BA from Carlton College and masters and doctorate degrees in history from the University of Michigan. His academic career was interrupted by the Korean War where he served in the Army stationed in Tokyo Japan. His entire teaching career as a history professor was spent at DePaul University in Chicago where he taught for over 50 years. He always spoke fondly of his students and his advanced classes where debate was fostered and encouraged. As the department grew and the need arose for a professor to teach Russian history, he rose to the challenge, doing research and writing his own book. He carried his love of history and current events into retirement, participating in book clubs and discussion groups. Sports and exercise were a regular part of Corny’s life. He was a lifelong Michigan Wolverine fan and loved Big 10 football. He enjoyed cheering on the Chicago pro teams and called the Cubs the “Loveable Losers”. His love of swimming spanned his entire life and included captaining and being on the swim team at Carlton College. In addition he regularly played racquet sports, organizing a Saturday morning tennis group for many years and playing well into his 80’s. His love of games expanded to Bridge, Poker, and Sunday Game nights and later board games, Trivia, and cards with the grandkids. In the winter he tirelessly spent hours making and maintaining the family backyard ice rink which was enjoyed by friends, family and neighbors and in the summer he grew a wonderful assortment of garden vegetables. In addition for many years he umpired neighborhood “softball” games, planned block party kids contests and helped lead the 4th of July block parade. Dad created many cherished memories as the family photographer and meticulously planned and chronicled many wonderful family road vacations to California, Florida, Yellowstone National Park and others. His children fondly remember the infamous red sweater which he included in many scenic photos to “improve the color” of his slides (or when the kids resisted getting out of the car). A dog lover, Corny supported the SCPA and all his dogs over the years loved him dearly. Dad had a love of “acting” although his only formal role was in a grade school play of the Prince and the Pauper. However, he could recite jingles and intros from old radio and sing all the verses to every Christmas carol with drama and finesse. He played regular characters with kids and grandkids: Ghost, Monster, Mr. Stranger Danger, and the infamous “Fake Santa”. Dad had always told us of his desire to Donate his body to Science and his generosity was very low key and understated. He was a man of little advice but big example. We will miss reminiscing and laughing with Dad about the family vacations, experiences, and cast of family characters with which our lives have been blessed over the years. His place at the table will be missed terribly.