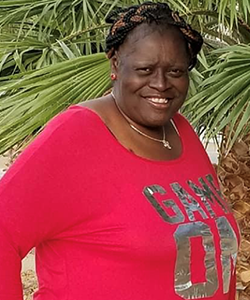 Crystal Patrice Ester was born December 3, 1960, in Chicago, Illinois to the union of George and Daisy Ester who have preceded her in death. She was the youngest of three children; her sister Rosalyn Ester who has also preceded her in death, and her brother Darrell Ester.Crystal attended Hyde Park High School and continued her education at Olive Harvey College where she graduated with an Associates Degree in Childcare Development. She then went on in her career to become a Teaching Assistant in Special Education, along with other roles in early childhood and education for over 10 years.Crystal accepted Christ at an early age. Her enthusiasm for life was fueled by her passions for cooking, traveling, shopping, movies, music, and most of all her family. She possessed a truly unselfish heart that was warm, motherly, and compassionate. Her charisma and individuality were magnetic to everyone she crossed paths with. She continuously extended her kindness even after death, as her wish was to be an organ donor and donate her body to science.On January 21, 2022, God called her home to her final resting place.