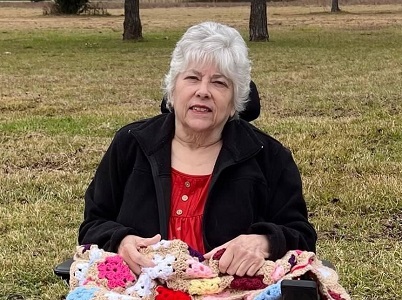 Dale Ann Nicholson passed peacefully at the age of 70 on Thursday, August 11, 2022 in the comfort of her home after battling ALS (amyotrophic lateral sclerosis, a progressive neurodegenerative disease that affects nerve cells in the brain and spinal cord, also known as Lou Gehrig’s Disease, attacks cells in the brain and spinal cord that carry messages from your brain to your muscles). After her diagnosis in March 2021, she enjoyed traveling as much as possible to see family and friends all over the United States. She loved being able to hug everyone and share stories of joy. Born in Warwick, Rhode Island on March 28, 1952 to Ann Elizabeth Lynch and Bobby Nicholson. Dale was passionate about foreign exchange students and helping them find the perfect homes in the US for a cultural experience. She has been involved with thousands of students and families from all over the world for thirty years. She was able to travel to many countries and enjoy time with previous and future students and would always tell anyone about the students, host family lifelong rewards, and program benefits. She moved to Pensacola, Florida in 1985 and returned to Rhode Island in 1998 to care for her mother and her companion, Normand, until their passing in 2012 & 2013. She then moved to Midland, Texas in 2017 to live with her daughter and son-in-law, with the plans to travel in her new truck and camper. Dale was an independent mother and daughter who raised three children. Our mother was a kind, caring, and giving person who always put the needs and best interest of family, friends and even strangers before her own. She was a strong woman who faced every challenge in life with courage and dignity. Our mother was a source of inspiration to many people and will be deeply missed by everyone whose lives she touched. She was very thankful to her son-in-law, Chris, who took care of the house responsibilities which allowed her daughter to be her full-time caregiver. Per her wishes, no funeral or service will be held. She wanted her body to be donated to science so she could continue to help as many people as possible. She chose to use the Science Care organization. She asked that you just take care of your family and friends and know that she is at peace using her wings that she earned. In lieu of flowers, please consider a donation in Dale’s name to the following organizations that assisted after her diagnosis: 1) The ALS Organization-Texas Chapter. https://www.alstexas.org/donate/ You can also donate in other ways at your local chapter in your state. There are many needs for assistance in every state, 2) Hospice of Midland. https://hospiceofmidland.org/donate They were compassionate in their care with mom in her final months, 3) Team Gleason. https://teamgleason.org/. Mom, you will always be in our hearts and we will never forget you. Give Gram and Norm a hug for us. We love you so much. Rest in peace.

Dale was predeceased by her parents, her mother’s companion Normand, and her brother Bill. She leaves behind her brother, Bobby Nicholson, her three children: Deborah Capron (Mike Capron), Sandra Wilson (Chris Wilson), and Jason Nicholson (Katie Nicholson). Grandchildren: Dakota Babb, Jessie Nolan, Christopher Nolan, Nevada Babb, Mitchell Capron, Destiny Nicholson, and Addison Nicholson. Great-Grandchildren: Trigger Babb, Bo King, Stetson Babb, and Georgia Babb. Her previous stepchildren: Kim Hyman and Wayne Hyman, Jr., Melissa Parsons, and Alex Parsons, who she loved and considered her own. Her previous son-in-law’s: Ray Nolan and John Babb, who were still important in her life. She has many friends and host families who she considered family as well.