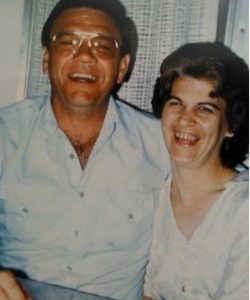 Dennis L Martin lived most of his early years in the McMinnville Oregon area. He was the oldest of 9 kids, 8 boys & 1 girl. He was in the Air Force.Dennis & I first met on April12, 1986, Lake Havasu City AZ & from that night we knew we’d be together for the rest of our lives. He was in the middle of trying to finalize his divorce from his first wife, but thru some certain situations it took much longer than we had planned, so his divorce was finalized on July 24, 1989. On July 28, 1989 we finally got married. That is also my daughter’s birthday (from my first marriage) & Dennis made that day a surprise for her which that day was the day she wanted us to get married on, so we did at the Justice of the Peace.Dennis has 2 sons from his first marriage. At first, as it does go with step-families, it was a bit rough for us & our kids. As they grew older & matured the relationships between all of us got much better & more loving. In 2005 we were given Dennis’ youngest son’s dog, Olivia. She was a white & tan cocker spaniel with no tail. After the kids grew up & went their own ways, Olivia became like our child & of course we spoiled her to a degree.In Sept 2014 Dennis was starting to not feel himself so tests were taken. He was feeling ok but starting to feel pain in his left lung area. We were told he had the rapid type of cancer, “small cell carcinoma”. He went thru all the treatments & we’re both praying that they did their job but such wasn’t the case. We were told in mid Nov 2015, nothing else could be done for him so I immediately called Hospice in to take care of him. On Dec 20, 2015 he passed away in his sleep & I was by his the whole time taking care of him.During the years of 1993 to 2014, both Dennis & I worked for Sonora Quest Laboratories. The medical community called us the “Courier Couple of Lake Havasu”.On Easter morning this year, our dog Olivia passed away. I guess she missed her daddy more than I thought & I’m the one she would follow everywhere. That was really overwhelming for me, now being totally alone without my 2 precious loves of my life.I miss you my beloved husband but I know one day we’ll be together again! Barbara