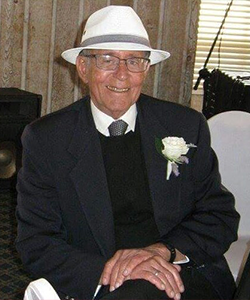 Edward Craig Thompson passed away Feb 10, 2022 at his home in San Diego after fighting lung disease, COPD. Craig was born July 26th, 1941 in Estelline, So Dakota to Melvin Harold and Edna Lillian (Bell) Thompson. They moved to Rapid City, So Dakota in 1951 where he graduated from Rapid City HS in 1959. He graduated from SD School of Mines and Technology in 1963 with a Bachelor’s degree in Electrical Engineering. Craig spent his career working in the Aero Space Industry. He worked at General Dynamics in Pomona, Calif 1963-78, where he became Program Manager. Then he worked at Technology Service Corp in Santa Monica 1978-94, where he was Manager of Development Laboratories. He received a Master’s Degree in Systems Engineering from West Coast University and a Master’s in Business Administration at Cal Poly University, Pomona. Craig was married in the Lutheran Church in Rapid City to Rosalie Rich, 1961-1975. They moved to Diamond Bar, CA when he graduated. They had 2 daughters, Robin and Rene. Craig was married to Victoria Higgins, 1977-2006; they lived in Los Angeles, Santa Monica and then Oceanside. Craig retired from TSC in 1994 and enjoyed traveling and was active in the community of their avocado ranch in the hills of Oceanside before he moved to San Diego in 2006. Craig has seen the world, visiting many countries with his work and on vacations. He loved traveling to hot sunny places, wine tasting, eating out and critiquing restaurants and he enjoyed deep sea fishing and sailing and, while living in Los Angeles, going to the Kings hockey games. Craig was known as quick witted with an analytical mind, he was a kind and generous friend, son, brother, and father. His daughters remember their Indian Princesses camping trips, trout fishing and later trips to Cabo San Lucas to his timeshares to enjoy deep sea fishing and beach fun. His children and grandchildren will miss having him at all the holiday and birthday and special gatherings throughout their lives. They thank him for all the advice and help and support and say he was the kindest, funniest man they have ever known.

Surviving are his daughters: Robin Livingston of Las Vegas, Rene McCarthy of Carlsbad, CA, and stepson Jamie Thompson and 3 grand daughters, 2 grandsons, 9 great grandchildren and one gr-gr-grandson and his sister Connie Julien of Houghton, Michigan and her sons Jason and Jonathan and their families. Craig is predeceased by his parents and aunts and uncles.