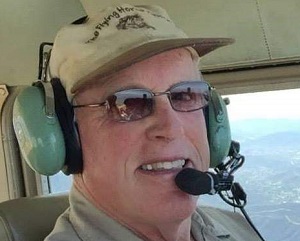 George lived a full life and took so much pleasure in all he did. In doing so, he gave so much more back to his family, friends, and community. Born in New York, George enlisted in the Navy, serving in reserve and active capacities. Upon discharge, he left New York and headed to Southern California, a place that he would come to know as home. Living in California afforded George the opportunity to start a career in Television, get his pilot’s license, and create an aerial photography business. His business, Ace Aerial Photography, proved to be a source of great adventure for the family that he started with Ann. George would take the kids, Jennifer, Kimberly, and Stephen, for flights allowing them to fly the plane and participate in some small way to help with the cameras and hold the aircraft steady. George and Ann eventually saw the kids all moving out and on with their lives and decided to buy some land where they built their own home. George was an ever-active participant in the dream that he and Ann shared, from the grading of the property to the raising and enclosing of the walls. In the last chapter of his life, George welcomed his children, and their children, to his home and relished in watching them all flourish. He used to brighten the room with his “lightbulb,” and despite being gone, the light remains. George left us with his family at his side, sharing stories and finding laughter despite the circumstances, something he would appreciate. He left this world knowing those he raised and created a life with would be ok.