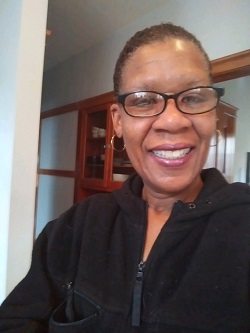 Gina Moore was born September 3, 1961 to Mr. and Mrs. Faulk. Gina’s mother Estella Anderson Faulk Ph.D raised Gina and made her the loving, beautiful woman she became. Gina’s life began in Chicago, Il, she attended Whitney M. Young High School. Gina Moore and Michelle Obama both attended Whitney Young at the same time and both are in the same yearbook. Gina continued her education and attended Chicago State University. Gina’s family was known for their educational pursuits. Gina’s mother opened a business (ELG Estella, Lolita, Gina). Their focus was instrumental in getting school district public schools off probation that didn’t meet Chicago standard criteria under the leadership of Superintendent Paul Valls’s Administration. Later, Gina worked as an Administrator at Northwestern University until her mother became ill. When Gina’s mother suffered from Alzheimer's, Gina gave her all in being her caregiver. This is when Gina decided it’s best to leave her job to be on hand for anyone needing her love and affection during one’s illness. When Gina’s sister, Lolita, who had multiple sclerosis took a turn for the worse, Gina stepped up to care and help her sister and Lolita’s husband in every way possible. When Gina’s husband Michael became ill with cancer, again she was there however possible to care and assist him. It seems this was her new position in life. While taking care of family, Gina decided to start her own business as a designer, making and selling custom jewelry and pictures. She then went from that line of work to finding comfort in her love for animals and started sharing that love as a dog walker for many pet owners who needed her service. There was no end to her putting both feet forward. Gina contracted uterine cancer and she made it her choice to handle it her way. One must respect those decisions as hard as it may be to accept. Gina leaves to cherish her memories into the hearts of her loving husband Michael C Moore, her nephew Jehon Wadlington, and his three children Melanie Wadlington, Mariah Wadlington, and Christopher Wadlington. Gina your good heart and beautiful smile will be left in the memory of many who loved and cherished you. May you rest in peace until we see you again.