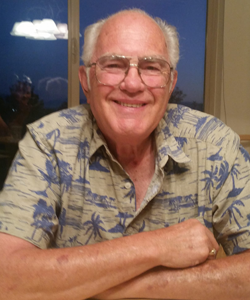 Glenn passed away peacefully at home after a lengthy battle with Alzheimer's. Glenn lived and worked his entire life for his family. His devotion to me was noticed and admired by all. After graduating from high school in Benton City, Washington, Glenn joined the Air Force. While stationed at Luke Air Force Base, Arizona, Glenn met the love of his life, Judy. After they married, Glenn had one more tour to complete in the Azores, Portugal. When he returned, Glenn and Judy made their lives together with Glenn rising through the ranks of utilities: coal fire, nuclear, and gas power plants. Glenn and Judy were happily married for almost 61 years.

Glenn and Judy had three children - Michael, Michelle (Brian), and Sharon. Glenn loved playing with his grandchildren: Jeffrey (Cristina), Steven (Marianne), Kyle (Alyssa), John (Mia), Alex (Caitlin), and Sarah, as well as his great-grandchildren: Lucas, Brady, Tommy, Wyatt, Jude, and Dallas.My love for Glenn will continue to grow as I remember all of my beautiful memories with him. A special thank you to Traditions Hospice for their wonderful care and support.