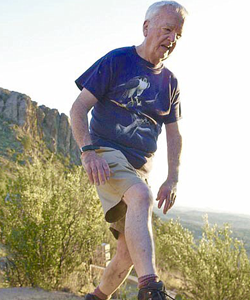 Jim Powers, known to his family by ‘Pops’ was a lifelong nature lover, humanist, canoeist, ice climber, and hiker, along with being the ultimate Beagle lover, ( he had 4 rescue Beagles throughout his life). He met and married my mother Betty, at a Sierra Club ‘singles’ group hike, on the top of Mt. Wilson in Southern California. They were both in their late 40’s, with Pops being a bachelor until meeting mom on that fateful hike! They spent weekends together hiking, canoeing and camping, camping outdoors under the stars, never using a tent, as their shared love of nature was important, even sleeping outside, on top of the mountains they hiked. Moving to Prescott AZ in the late ’80s, a home they purchased right under Thumb Butte, Pops would hike up the mountain daily at 4:30 am, and back, for decades! He was featured in the local Prescott newspaper, after a reporter was told of his hiking in his late 70’s, into his 80’s. He was also a big part of the Prescott Forest preservation and dutifully counted the eagles and their nests each season, for the Prescott Forest data. Jim was a lover of classical music and science books on tape. His daily 3 PM shot of whiskey was always his enjoyment, along with weekly visits to his favorite Japanese restaurant in Prescott, Fujiyama. Jim, our ‘Pops’ led an exemplary life, one of true love and respect for animals, nature, and the big outdoors, along with the assorted Beagles he loved! His memory will always bring a smile to those who knew him!