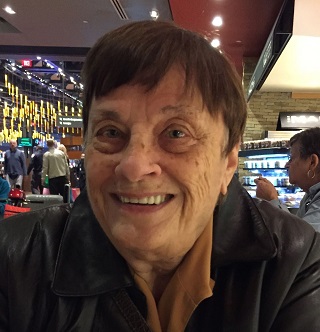 Jean Minnie Frame Williams was many things in her lifetime - an artist, an adventurer, a cancer survivor, a church goer, a rock and roll enthusiast - but first and foremost she was a loving mother to her six children, Tony, Melinda, Mark, John, Lori and Gina, and a loving wife to her husband, John. She was also a loving grandmother to her many grand and great grand children. Jean got married to John a few years after he'd returned from Europe at the end of World War II. Soon their family would start to grow. During the 1960's and 70's the couple would host some of the best clam bakes, corn roasts and holiday parties of which the neighbors would all attend. At the age of 49, she found out she had a large tumor in her colon and had surgery to remove it. She never seemed to slow down, even then. She beat the nasty beast, and was cancer free the rest of her life. Jean was an artist and craftswoman. She had worked with ceramics for many years and then in her 60's she started working with wood to make dolls. As the years went by, she honed her woodworking skills, even getting a scroll saw in her basement, much like her father before her. She made all kinds of decorations for her family, whether it was to place on a wall in the house or to put out on the porch or in the yard. After the kids were grown Jean's husband, John, began suffering from early onset Alzheimer's. She became his main caregiver. At this time Jean found solace in rock music. She would learn all about bands, their members and history. She would attend concerts whenever possible. When John passed, Jean continued attending as many concerts as she could convince her family to take her to. She was a big fan of a wide spectrum of artists from AC/DC to Neil Young, Journey, Jackson Browne and Ozzy Osborne, to mention a few. One time, while attending a concert at an outside venue, she fell while walking to her seat. The EMTs were there immediately to help her. They wanted to take her to the hospital to make sure she was all right. She told them “No, I’m not going anywhere until after the concert.” Fortunately, she was fine. Her adventurist spirit brought her to the open skies. When she was in her mid-seventies, she started sky diving. She would go as often as she could convince someone to take her. Throughout her life Jean had a wonderful and self deprecating sense of humor. She also had no problem with invoking a gallows sense of humor in her final few years. For example: one time a couple of her children came into her room to find her slumped over in her chair, her head tilted to the side and her tongue hanging out. Someone called out in surprise and concern, "Mom, mom…”. Jean lifted her head and said, "Don't worry I'm just practicing." The she grinned at them. It was Jean’s wish to contribute her body to science to help make a difference. Jean's open-minded and loving soul will be greatly missed by all.