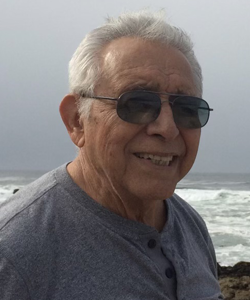 On Tuesday, January 4th, 2022, Joseph G. Huerta went to be with his Lord and Savior. Joseph was born on July, 9th, 1932 in Phoenix, Az. In 1951, Joe enlisted in the U.S. Navy for what was to become his career for the next 25 years. While in the Navy he was awarded 6 Good Conduct Medals, United Nations Medal, Korean Service Medal, National Defense Medal and the Viet Nam Service Medal with four service stars and the Republic of Viet Nam Campaign Medal. After his retirement, Joe went to work for AlliedSignal Co for the next 14 years. Joe was a bible teacher. He started a luncheon bible study on Fridays and was known as “The Preacher Man”. Joe was also the Chaplin and Assist Chaplin at Turf Paradise for many years. During this He leads another bible study group called Sermon of the mount with Lew Sterrett. Other days he helped some of the men that worked the stables with their paperwork to become citizens. Family bible studies were also something to look forward to every month. He never missed an opportunity to bring people to the Lord. That became his God given “gift”. Joe leaves his beloved wife, Minerva, daughters April, Rafaela, Chela, Monica and Terry, predeceased by daughter Billie. Sons Joseph E. Vincent, David and Mike. Sisters, Laura Huerta and Yolanda Domenzain and brother Edward Garrido. Also, with many grandchildren and great grandchildren. Memorial service will be held on Saturday, February 26, 2022 at 1:00pm at North Phoenix Baptist Church Chapel on Central Avenue and Bethany Home Road.