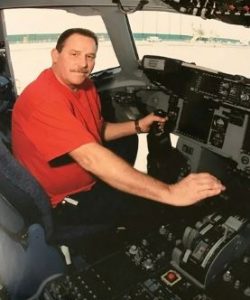 Mike was born in Los Angeles. His dad was going to USC finished and went to work in Bellflower Ca. As a social worker. Move into Lakewood Garden Civic Association of 250 homes. Where we had a blast! We had a club house and pool. It was a wonderful neighborhood. Swim teams, Boy Scouts, Girl Scouts. Mike was 7 when his dad passed. We all helped mom. Mike got a paper route for press telegram. I think he started at 9. I helped him. We all worked at anything we could. Mike work for the car wash. Then he moved to mom’s brother Wesleys in South Dakota. Mom was 2nd out of 13. Dad 7th out of 12 where he learn farming. Then moved to town with dad’s sister Fritzy and finished High School and worked for Mom’s sister Carol and Jerry’s Phillip 66 gas station as a cook in their coffee shop. Then went to work for Terry Thomas’s cable TV company where they put cable TV in the Mid-West.He met his first wife Becky Conklin in Minnesota. Married and moved on to Okalahoma where their daughter Lana was born. They moved to California where Mike worked for Mac Donald -Douglas. They divorced and he met his wife Debra Gauch. They have twins. Summer and CODY. And step daughter Nicole Wilkey. Summer’s son is Anthony and one on the way with William. CODY has a daughter Amily and son Jackson. Nicole has daughters Cheyanne, Kylie,Alexis, and Ryder. Lana ‘s daughter Alexandria was born to soon in Nov.14 2005-6/16/2007. Mike loved children and family the most! Michael died of COPD (cigarettes)