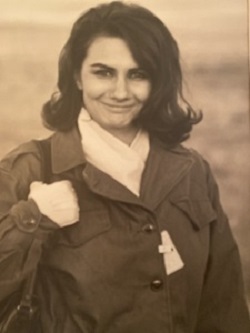 Anita was born October 16, 1947 to Frances Devaine & James Logan Richè at St. Paul’s hospital in Dallas, TX. She spent much of her life in Texas, 5th generation. She spent several years in California with her mother where she decided to have her 1 child, she selflessly gave up for adoption. Anita loved animals which is evident today with donations, her many cats still at her home, and the stories of her rehabbing eagles, possums & other critters back to health and back to the wild. She even had one of the oldest living cats in the State of Texas. After graduating from LD Bell High School in Hurst, TX in 1967 she proudly joined the U.S.A.F. with fond memories of her time in Japan. She ended her service stationed at E.A.F.B. California. She had travelled the World in her days. Anita worked for A.D.C. for 30 years as a professional medical Coder as a member of the A.A.P.C. Anita was an organ donor. However, as her heroic efforts came to a close, she battled metastatic bone cancer, lung cancer, and Leukemia which damaged her organs making her unable to participate in organ or tissue donation. She had previously survived breast, skin, and thyroid cancers. BUT, her story doesn’t end there! Her Big Love of science was ultimately fulfilled in her death by donating her body to the “Science Care” Program so that future generations can learn from her. In the end, the very well-read Anita sat with the teachings of Buddhism. Her body ash to ash. In her infinite Wisdom of Space, and the love of our great big Universe, she’s now a twinkle in your night sky and will once again return until she gets it right! We all love you Neaty! A service with full Military Honors will be planned.

Neaty was greatly loved by her Sister, Nieces, Nephews, Daughter, Grands and Great Grands. Chris was a true and close friend and one time neighbor. Jana a one time roomie and neighbor loved her Neaty “purr” hugs. Jay shared her love for all things of the Universe. Anna was her shining star. In passing she had a pencil drawing of a Star Anna gave her as a child. Her big sister Veniece says at various points in their lives they rescued one another. Brother-in-law Wendell Irby Johnson shared the love of mountains and desert in New Mexico and Texas. Reuniting with her Daughter Pam in California in 2000, (thank you Jay & Renèe) they shared a deep love for the stars in the sky, Mother Earth and all living things. Learning all about nature vs nurture. Anita met her 2 Grands, Britni & Tyler. She was even able to see two Great Grands arrive, Camila & Olivia.