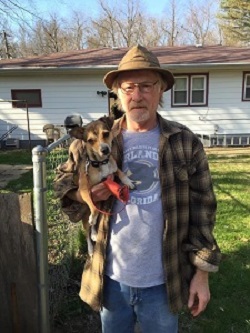 Rickie Ray Seibold was born on January 13, 1954 in Ponca, NE and passed away on February 15, 2022 from stage 4 lung cancer. He is survived by his mother, Bonnie Seibold; sister Tammy (Tom) Wickenberg; Marvin (Cheryl) Seibold; Daughters Tara Seibold and Tasha (John) Neisewander; Grandchildren Tristen and Mackenzie Wagoner; Owen and Elliott Neisewander and furry side kick Toby. Predeceased by his father, Marvin Seibold; brother, Steven Seibold and sister Patricia Keckler. Born in Ponca, Nebraska; Rickie lived in many different cities before his parents settled in Rockford, IL. He attended Lincoln Middle School and East High School. He was employed at 17 years old as a fork truck operator with J.L Clark and retired in 2014 as a machinist. He worked at J.L. Clark with his older brother Steve for 34 years until his death in 2012. Because his brother donated his body to science it was important to Rickie to do the same. In his younger years, he spent afternoons at his favorite watering hole, The Rusty Nail. In retirement Rickie enjoyed bringing his boat up north for fishing trips, camping with his sister Tammy and brother in-law Tom, Slot car racing, and taking care of his lawn. He built a great relationship with his adult daughters. Rickie was always helping them with different home repairs, and almost daily phone calls to talk about nothing much. He traveled to Atlantic City, Colorado, Arizona, and England twice for work. A memorial picnic for family and friends is going to be held at Bauman Park in Cherry Valley, IL from Noon to 3pm.