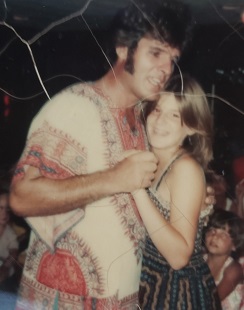 My father, Rob, was an actor and an Elvis Presley impersonator when he was young. As a child, I always loved going to see him perform as Elvis, and he gave me my love of music. When I was a teenager, he had a small role on The Young and the Restless, and he brought me to New York City with him, so I could see what it was like backstage and on the set of a tv show. It was so exciting for me! I moved to another state as an adult, so we were apart for about 20 years, but this past year, he moved to the same town as me, and I am so thankful that I could spend his last year with him. I am including my favorite picture of the two us from 1975 when I was 10 years old.