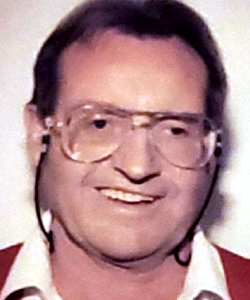 Roy L. Haidet passed away from a sudden illness on November 10, 2021, in San Marcos, California. He was born on October 3, 1937, the son of the late Walter and Ruth Haidet. He was the youngest of six siblings. Sister Donna (Jack) Zimmerman lives in Tennessee, brothers Dale (Claire) Haidet lives in Florida, and Merle (Mildred) Haidet lives in Ohio as well as many nieces and nephews. He is predeceased by his oldest brother Wayne (Lillian) Haidet and sister Norma (Elmo) Hostetler. He is survived by his wife, Rosalia, of 42 years, who he met in Chicago, Illinois.Roy volunteered at the Ronald McDonald House in CT and one of his greatest pleasures was playing Santa Claus. His wife’s boss also asked him to play Santa Claus as her children recognized their dad and uncles if they dressed up. Her son was born on Christmas Eve with heart problems and she held a separate birthday party that included friends her son met during his stay at the children’s hospital. Roy would find out the children’s “nice” and “naughty” habits from their parents. When Roy spoke to each individual child and relayed the information, (especially the “naughty” habits), what a surprise from the children! Roy would later hear from the parents that their child refrained from doing those “naughty” habits. It would take your breath away to see the joy in the children’s faces that Santa Claus came specially to see them!When Roy and his wife bought their home in California Roy enjoyed meeting the neighbors: he had a wonderful sense of humor, always left you laughing, always willing to help or give friendly advice. Roy and Rosalia traveled extensively. He especially liked cruising and spent the last year-and-a-half planning their next voyage.Roy spent most of his career in the Insurance industry. He started as a Field Representative for Ohio State Life Ins. Co. He moved to Chicago, Illinois in 1965 where he devoted 14 years (1965 – 1979) at CNA Insurance as Field Representative, Manager, then Director of Product Development. He saw an opportunity with American Agency Life Insurance in Atlanta, GA for a year where he developed five new Life products and promotional materials for the Independent Agency market. In 1980 he moved to Danbury, CT. and became Vice President of American Progressive Life and Health Insurance and Life Insurance Co. of CT. After a couple of years, he retired due to prenatal eye disease of toxoplasmosis which progressed over the years and eventually left him legally blind.