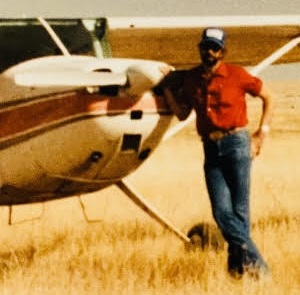 Terry has been described as a gentle giant (6'5") by his friends & family. He was born and raised in the Rio Grande Valley in TX. He had many occupations from being a USDA agricultural inspector, farrier, project manager for celebrity marble installations (think Cher, Janet Jackson, Jack Lemmon + more), an over-the-road trucker (OTR), and a restorative fuel farm installer (think Telluride, Steamboat Springs CO). He was an avid reader - often 3 books at once, and used his wide vocabulary even through his dementia (had those doctors fooled!) His passions were many, flying his small airplane, playing tennis, driving dune buggies in CA & UT, firing weapons, performing reenactments of wartime explosives at airshows, and taking photos of clouds & nature to name a few of which were published. Terry loved his granddaughter and me so intensely, gave us so much love and attention, he fought with me through dialysis and kidney transplant. My favorite prayer of his before dinner was: "God is good, God is great, all across the Lone Star State, yea God."