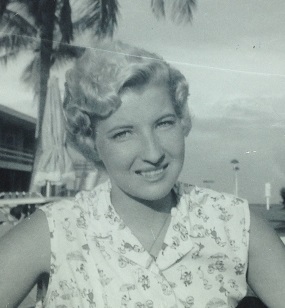 Vicki Louise DeLorenzo, age 81, died Thursday, December 8th of Cardiac arrest at The Woodlands in John Knox Village, Pompano Beach, Florida. Vicki was an avid traveler, reader, writer, and caretaker of animals. Born August 19, 1941, in Johnson City, New York, she was the younger of two sisters. Her parents were Charles Reginald Boggs and Mae Irene Wilde. The family traveled frequently throughout her childhood, and her high school years were marked by travel between the USA, New Zealand, and Canada. She first went to Rollins College in Winter Park, Florida, for two years beginning in 1959, before transferring to the University of Florida in Gainesville in the fall of 1962. She graduated in 1964 with a B.A. in English, with a focus on Journalism. After college she had many jobs including Staff Writer at the Sun-Sentinel, a copywriter at Little, Brown and Company, a job in the Editorial Department of Gambit Publishers, and later as an Associate Editor at Biomedia, Inc. While living in Fort Lauderdale in the late 1970s, she landed a position with IBM in Boca Raton, in a new division dedicated to the development of personal computers—the first of their kind. She was a technical writer of many of the early manuals, including Word Perfect, and her work was seen in the famous Charlie Chaplin series of commercials in the early 1980s for the IBM PC, Jr. She went on to become an editor with IBM. She stayed in that role until her retirement many years later. She traveled throughout her life and visited many countries for both work and pleasure, including Ireland, England, Scotland, France, Switzerland, Italy, Turkey, Greece, Holland, Belgium, Germany, New Zealand, Canada, and many other countries. Her main passion was caring for animals, and she always had a cat (or two…or three) at home as a companion. After she retired she dedicated much of her time in volunteering at the Domino’s House No-Kill Cat Shelter in Palm City, Florida. There she would help take care of the many cats, horses, and emus on the property, and occasionally foster kittens, and socialize them, preparing them for adoption. She is survived by her son, Mark; her sister, Diane Moran & Diane’s husband, Michael; and their three adult children: her nephews David & Randall Moran, and her niece, Christine Scott (and their many children). A lifelong reader, she also loved to write stories and poetry, and in closing, I would like to share one of her poems with you. LOSS: My God loves animals – all kinds. And heaven is a place where cats can roam. There’s comfort in the thought I’ll see again. My gentle cat when my God calls me home. But now the pain is great, the hurt is new… I miss her nightly greeting at the door. How silent is the dawn without her cry, How bare the house without toys on the floor. A catnip mouse I found beneath my chair; I put away. Alone I sit without soft fur to pet; And loving words to speak. The pain will pass, But I cannot put away her dish just yet. Vicki DeLorenzo