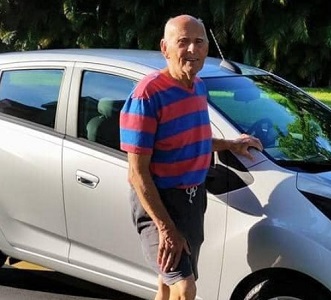 Wayne Kenner, 82, died of lung and heart failure peacefully at home in DeLand, FL, under the care of hospice nurses and his wife of 59 years, Carolyn. Wayne’s early years were typical of a North Dakota childhood. He grew up on a farm near Devils Lake with his younger sister Marly's and their parents Walter and Esther Kenner. The whole family kept busy with school, 4-H shows and competitions, farm chores, and leisure time spent visiting family and friends in town and on nearby farms. He first left Devils Lake when his exasperated mother grew tired of him playing cards late into the night at Lake Region Junior College. She packed his 1958 fin-tailed Chevrolet for him and told him to let her know where he wound up. He drove to Jamestown, ND and enrolled in college there. Later he transferred to Valley City State University in North Dakota, where he earned a teaching degree. He met Carolyn at a party on New Year's Eve. They fell head over heels in love. The two exchanged epic love letters, now part of the Department of Special Collections at the University of North Dakota, where they stand as historical documentation of life in the early 1960s. They married on September 26, 1963, in Kloten, ND, where Wayne was a high school teacher and basketball coach. Their daughter Corrine was born ten months later. He left teaching for a career with the United States Postal Service, beginning in Minneapolis, where daughter Claudine was born. After a few years in Minnesota, they moved to the Kenner family farmstead in Devils Lake, where daughter Cari was born. Wayne spent countless hours in a garage workshop tracing and cutting patterns in wood with a scroll saw, making sunflowers for his daughter Cari’s wedding and enough wooden tulips for many grade-school classrooms to paint as Mother’s Day gifts. Summers were for hosting grandchildren, who say the long summer days they spent on the farm in Devils Lake were some of the best days of their childhood. Wayne had his first taste of life without the perils of snow and bone-chilling cold when he and Carolyn began wintering at South Padre Island, TX. He and Carolyn found a community there with other retirees and spent time volunteering at the island’s sea turtle rescue facility. If you needed a ride, Wayne would take you wherever you wanted to go. He drove the distance to the moon in college and shopping trips from Devils Lake to Grand Forks for his daughters, grandchildren, and foster children through the years, and added additional miles driving to Winnipeg to visit Claudine's family. Once he even made a 400-mile round trip to deliver a math textbook granddaughter Natalie left in North Dakota. In 2015, he and Carolyn followed Corrine and her husband Dan as they left the cold winters of the northlands for the endless summers of Florida. He loved his final years in the Hidden Hills community of DeLand.