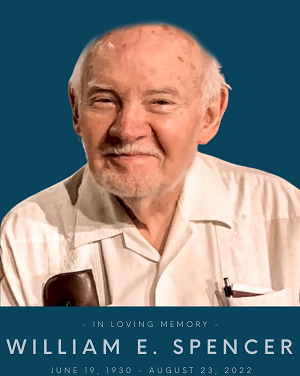 William "Bill" Everette Spencer, a loving husband, father, grandfather and great grandfather, passed away the morning of August 23, 2022 at home in Montgomery, Texas, surrounded by family. He leaves behind his wife Evelyn of 45 years, children Bill Jr., Cheryl, Brenda and Cindy, 11 grandchildren, 18 great-grandchildren, his brother Robert and sister Laurene. He was preceded in death by his brother Herman and sister Laverne. Bill was born on June 19, 1930 in Terry Mississippi where he met his first wife Merle Knight, who also preceded his death in 1973. He served in the US Army during the Korean War and later worked as a salesman, then at the Kennedy Space Center and as an entrepreneur for many years. Bill was a genuine and kind person to everyone he met. He loved to invent things and he had many interests. Bill enjoyed spending time with family, reading and story-telling. He will be truly missed by all who knew him.