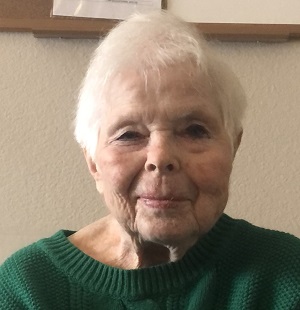 For those who do not know, my mother, Zada Marie Petersen Merrill, passed away on Saturday, Oct. 29, after a noble fight against C-Diff. She was 89. She was born in Jamestown, N.Y., on Feb. 16, 1933, the oldest child of Daphna and Ted Petersen, the children of 2nd and 1st generation immigrants. Mom inherited her Danish father's round face, large blue eyes and white-blonde hair. That hair color found its way to her children, Kenny, Patrick and me, and to my daughter, Emily Kunkle. While Ted's father was a blacksmith and Daphna's was a dairy farmer in upstate New York, Daphna studied to become an art teacher and Ted was the principal of Mayville, N.Y., High School. My mom was a top student and cheerleader, played women's basketball and the French horn and was pretty much a model teenager, albeit with a rebellious streak and quick temper. Country mouse mom met my city mouse dad, the late Roger Joel Merrill, while dad was at Union College and mom at the University of Rochester earning her Registered Nurses degree. It was fashionable for young people to take a summer tour of Europe and travel by boat across the Atlantic in those days, and it was on one such voyage that their romance began. Dad was taken with mom's sense of humor, her sparkling smile and keen intelligence. He was charming, smart and funny. Culturally, there were wide apart. Mom was a Methodist from farm stock. Dad was an Upper East Side Manhattan non-practicing Jew. Dad worked for IBM and mom's nursing career brought her to city hospitals, prisons, YMCA Summer camps and to the Westchester County Crisis Team. Both my parents were liberal Democrats, but it was mom who embraced the Hippie era and marched on Washington against war, the nuclear arms race and for Roe V. Wade, among other causes. Mom did so much good in the world. She embraced life and shone with a burning light. She spoke her mind. She was vain about her appearance and was admired for her good looks. She argued about politics and had an encyclopedic mind. She was an ardent reader of spy novels. At night, she often relaxed with the New York Times crossword puzzle and would blurt out, "what is a three-letter word for..." So many people loved and admired her. She was larger than life, a beacon of joy, a helper, a light bearer, a caring woman who burst with desire to make the world a better place. Mom spent her final five days in Hospice care. She was the epitome of peacefulness. On Saturday, after a brief walk, I went to her bedside. As I watched, her chest did not rise again. I choose to think she waited for me to come back to cross over. In this sense, mom died as she lived, doing things her way. She is survived by 2 children, 2 grandkids, her sister, one niece and grandniece, one nephew and grandnephew and many cousins.